Advertising affects us all in different ways. Some people are happy to openly admit the power it has over them and will freely state that certain adverts make them want to buy certain products, whist others are affected more subtly as the advertising lingers inside their head without them knowing.

However, whichever category you would place yourself in, we are all becoming much more aware of marketing, how it works and the tactics that are used to make us buy specific products. This has led to marketing departments having to come up with new clever and innovative ways to advertise; resulting in some eye-catching outdoor ads.

When Orphea created their own ‘4d Protection’ bug spray, they hit the snag of how best to get it across to their audience. Yes, a standard billboard would have been able to tell everyone about how effective this new spray was, but they really needed a way to show them just what this can was capable of.

As a result they came up with a very clever billboard and placed it in a busy area of Milan, with successful results. Using an invisible sticky substance, derived from the same stuff that goes into their spray, they created a bug-collage for passers-by to witness. The result looks as if the spray from the can has put pay to thousands and insects and can be seen on YouTube, here.

The fizzy drinks giant Coca-Cola is well known for its memorable and clever advertising campaigns. Case in point is that many people still don’t believe that Christmas has arrived until they see the iconic ‘Holidays are coming’ commercial every year. This billboard idea, though, was a little more understated but still just as effective.

From a distance it looks like a normal, red advertising board, but as you get closer it becomes apparent that there is more going on than that. With a slogan that reads ‘open happiness’ on the bottom, the hoarding is actually made up of multiple sheets of wrapping paper which can be torn off by passers-by and use to wrap their presents. Take a look for yourself. 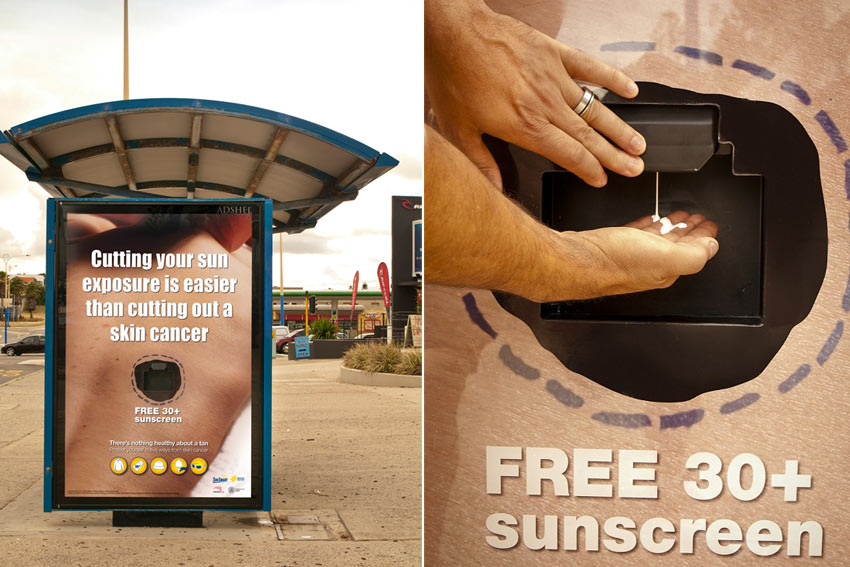 When the Western Australian SunSmart Cancer Council wanted to raise awareness of skin cancer caused by excess exposure to UV light from the sun, they realised that perhaps words wouldn’t quite get the message across with the severity that was needed. Instead, they created an interactive bus-stop billboard that would hopefully convey the sentiment a bit better.

Within a hole, which was made to look like a piece of cancerous skin that had been cut out of someone’s back, was a dispenser filled with factor 30+ sun cream. This mean that people could top up their sun protection as they walked past; resulting in them remembering the purpose of the ad more easily. 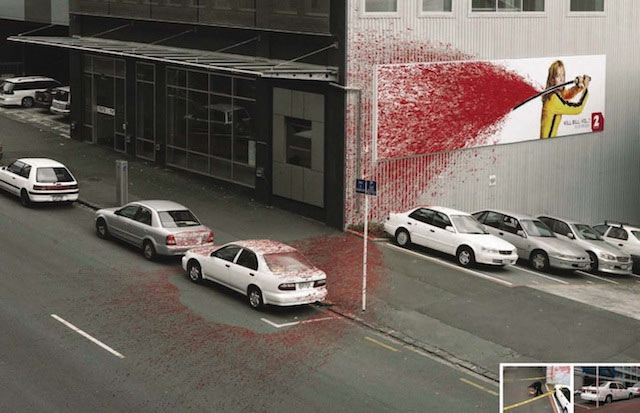 Anyone who has ever seen Kill Bill will agree that just simply putting a sword-wielding Uma Thurman on a billboard wouldn’t have done the film justice. Therefore, in order to get across the film’s true blood spilling nature to its prospected audience, the advertising company Saachi & Saachi New Zealand took things to the extreme.

Instead of just splattering the advertising hoarding with blood, they covered the wall it was on, the path next to the wall it was on, and three white cars which they had bought and specifically parked in the near vicinity. If that didn’t let people know what they were in for when watching the movie, I don’t know what would. See the ad as part of a list, here.

Whether it’s bus-stop billboards, PVC banners, high-street hoardings or roadside ads, advertising is definitely evolving. As companies start to use more innovative ideas to try and persuade us to buy their products, we are looking at a whole new form of marketing that appeals to our creative side.

About the Author: Chris Mayhew works in the marketing industry and is interested in the clever ways that companies try and persuade as to buy stuff from them or build awareness of their cause. He would recommend Big Value Banners to anyone wanting to create an effective outdoor ad for their business.

Previous Post: DDoS Attacks: How to Protect Your Business
Next Post: 6 Ways to Get Business Teams to Use Your CRM