Advertising and marketing is one of the most lucrative industries on the planet, with billions of dollars being spent on campaigns to try to boost brand awareness and sales in markets all around the world.  That said adverts are notorious for being one of the most annoying things that any of us can encounter at a particular time. Whether it is on television, in a magazine, or on the radio, many of us tune out once the adverts kick in.

Online advertising has been growing at a healthy rate for many years, and the trend is set to continue through the rest of this decade, and surely further into the future, too.

Where does this medium stand on the annoying adverts continuum, however? Most people tend to question the effectiveness of the other platforms mentioned, but is the same true when it comes to online advertising?

First, it is important to look at the various demographic age groups, and to what extent they use and benefit from following online adverts.

The table below, based on research from professional services firm Deloitte, demonstrates the percentage of people, by age group, who believe that online advertising is more impactful than the traditional offline methods mentioned earlier. 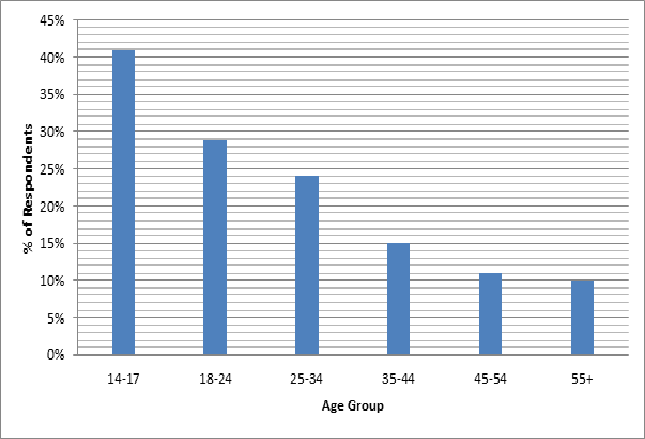 The results we see can be linked directly to the way each of these age groups interacts with the internet.  Although the internet is more accessible than ever before, everyone knows that younger generations seem to have a greater affinity with it.

Part of the reason for this is that they have grown up with and using it. Whether this is for educational purposes or using social media, for example, it is a fact that younger people tend to spend more of their time online.

At the same time, younger demographics have quickly embraced ecommerce, and are more likely to make spur of the moment, impulse purchases as exposure to and the pressure of participating in the wider consumer society comes earlier in life. In the past, people would look to find a magazine review, or go down to the store to see and try an item for themselves.

The youth of today are more likely to look at online reviews, and then make decisions based on cost and convenience. Of course, these are two of the main reasons ecommerce is a popular platform, and why advertising is designed to accentuate these positive aspects.

The figures from Deloitte would make us think that younger generations have embraced online advertising fully.

However, a study from German market research firm K&A BrandResearch suggests that this is not the case.

The following table represents the findings when a focus group of teenagers was asked about their feelings towards online advertising. Consider the earlier results from the Deloitte study while analyzing these.

·Note that percentage figures may not add up to 100% due to rounding of figures.

Despite clear figures that online advertising has an impact, or is at least perceived to, among younger generations, the same group of people actually finds it annoying at the same time. It is possible to link the two, however. We do not know the reasons why the teenagers and 18-24 demographic in the first survey found particular adverts annoying, but may be that the way in which they were effective was in being irritating!

What might the other underlying reasons have been for the results above?

Most of the time, people who are annoyed by online adverts find they are because adverts are irrelevant and they have no interest in them. This is a high number despite most irritating pop up adverts being blocked by browsers, and the majority of adverts being linked to previous pages a person has viewed!

This is easy to do online when you are looking for something specific, and is even easier on a mobile device when you can focus the screen on a certain area. It would be interesting to discover whether the 50% who got annoyed and the 49% who could switch off were all different individuals.

I Research the Product…

The low number in terms of online advertising here is surprising, especially given that people would already be online, where they can find all the information they need. Perhaps the feeling of having to proactively seek further information from an offline ad, whereas with online what you need to know is often within an ad itself, has driven this number.

I Went on to Purchase a Product…

Given the popularity of ecommerce within younger generations, this was another surprising outcome. Does it point to a lack of trust or suspicion around online advertising?

I Talk About Them With Friends

This is wholly understandable, as online ads can be personalized, and it is unlikely that a group of friends would all visit the same website, or group of websites, at a given time. In contrast, there might have been a funny advert during Game of Thrones that gets people talking.

A similar scenario to the above, but if an ad is on television, you have no choice but to watch it, unless it is recorded and you can skip through.

Offline adverts are easy to remember because you tend to see them more than once. You also have to consider that a 30-second TV ad will say a lot more than an online advert. This is understandable, considering that online adverts tend to be calls to action, where TV ads are more traditionally geared towards raising sales through brand awareness, although there are some exceptions.

How to Get Online Advertising Right

While online adverts are clearly both helpful and irritating in equal measure, there are ways for companies to cut out the negative aspect. One way to do this is through putting together a well-planned SEO campaign, as detailed in a recent press release from one of the leading SEO companies in the UK.

SEO brings a brand to the forefront of consumer minds through a strong search engine presence, is non-intrusive, and because SEO is in effect ‘behind the scenes’ advertising, consumers do not begin to harbor negative thought relating to a particular brand.

The message is simple: Online advertising is helpful, and it is annoying at times, too. It does not have to be, for any age demographic.

Karl is an online content writer with an interest in marketing trends and how they impact on people’s feelings and decision making, in respect of both online and offline platforms.

Previous Post: Are You Wasting Your Time When Advertising Your Business?
Next Post: How to Make Money from Your Business Blog: Gary Vee’s Pro Tip