The resistor is one of the fundamental building blocks of the electrical circuit. Just about every electrical device ever manufactured contains at least one of them. They divide voltages, they limit current, they protect sensitive components and, along with capacitors and transistors, they help us to design just about every current imaginable. 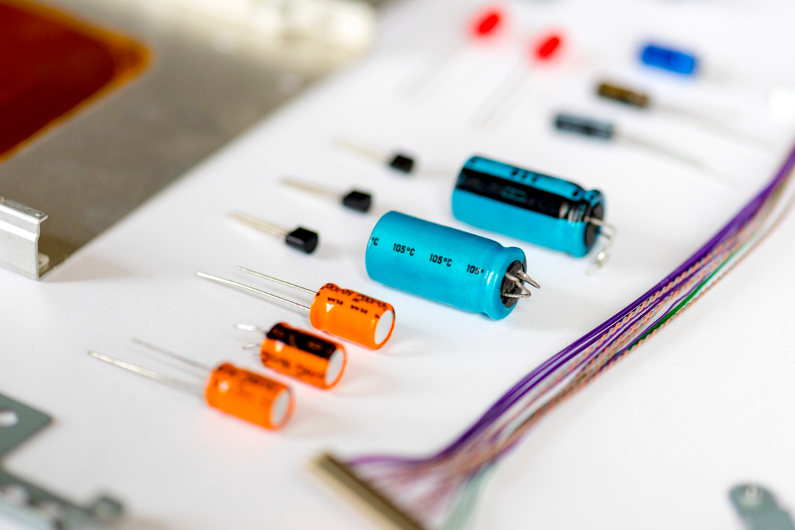 Look in the RS Components catalogue and you’ll find thousands of different types of resistor. But for the most part they come in two types: fixed and variable. These are used in different ways in different applications. Let’s look at some of those applications here:

Metal-oxide film resistors take things a step further; they’re able to offer tolerances of less than 5%, and even as low as 1%, making them ideal for applications where precise control of voltages is necessary, such as in sensitive measuring equipment.

In some cases, a large amount of current needs to be dissipated by a large resistor. Resistors which handle lots of power will be made using a wound wire of a higher-than-normal resistance. The longer the wire, the greater the resistance. You’ll find these in DC and low-frequency applications, where the inductive properties of a coil aren’t a problem.

In some instances, where precise calibration of the circuit is needed, a variable resistor is called for. You can think of these as a single continuous resistive strip, with a probe midway along. By adjusting the position of the probe, you can reduce the length of the resistor, and thereby decrease the resistance.

A potentiometer connects two wires of different voltages. By sweeping the potentiometer back and forth, we can adjust the voltage coming out of a third wire in the middle. You can think of this as working exactly like a voltage divider circuit, except that the values of the resistors are adjustable. Potentiometers crop up constantly in musical applications, where they’re used as a means of dividing the voltage of an audio signal, and thereby reducing its amplitude.

By shorting the middle wire with the bottom connection, we can effectively eliminate an adjustable portion of the variable resistor from the circuit, thereby creating a resistor whose value can be adjusted. Rheostats are used in dimmer switches and other places where current needs to be adjusted.

Previous Post: How Smart Technology is Adapting in The Manufacturing Industry
Next Post: What You Need to Know About Looking After Your Business Fleet