Sweden is considered as one of the most progressive and gender-equal countries in the world. But still, women earn a quarter of a million dollar less than men over the course of their work life.

According to statistics – at current pace – it would take more than 100 years for women’s salary to equal men’s. Waiting is not an option; something is needed to be done.

So, what a woman should do to get equal pay as a man? Kommunal, Sweden’s largest union, has the answer to the all-important question: Be a man.

Kommunal launches a campaign which is basically a protest against gender inequality in Sweden. How things work? Women should go to Beaman.se to have a ‘temporary sex change’ and have their photo transformed into a man using Be A Man’s very own Facebook app.

So, what’s wrong with Sweden?

According to Annelie Nordstrom, Chairwoman of Kommunal, it’s a disturbing reality that, despite the fact that Sweden is among the world’s most equal countries, Sweden still ‘hosts’ unequal pay between women and men.

Ms. Nordstrom says, “It’s sad that Sweden is considered to be a global example of equal pay, given how far we have left to go. Therefore we want to do something on a global scale to improve the situation for women everywhere.” 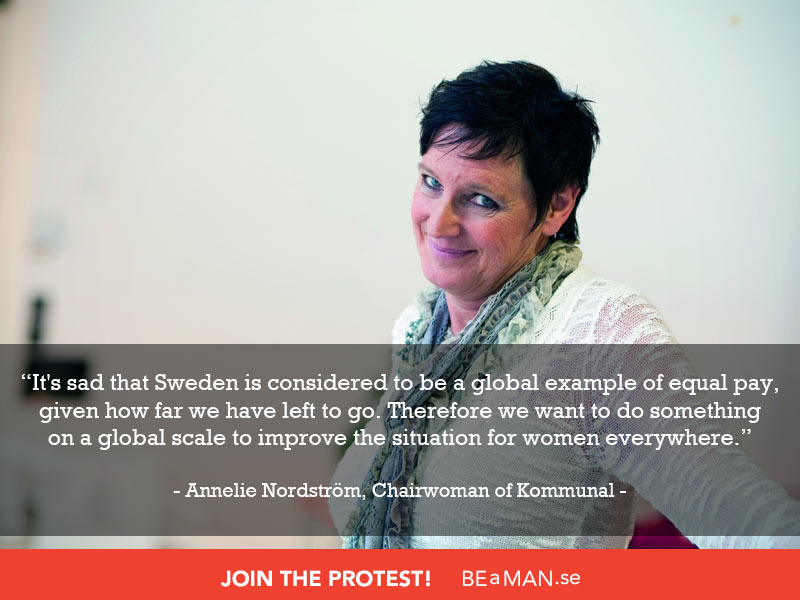 You can learn more about the campaign on http://beaman.se/

This campaign highlights one of the most troubling realities in the business world. Women are often regarded as less-significant than men when it comes to earning ability – either as professionals or as business owners.

If in Sweden, one of the most gender-equal countries in the world, pay inequalities are still a major problem, I can’t imagine how things are much worse in other parts of the world.

I personally perceive women as equal partners in business. I continue to ‘preach’ that I would rather dealing with women than men in business. I like assurance and ‘play-by-the-rule’ policy in any business deals and so far, I trust women more than men, especially in those areas.

What do you think? Are men deserve to be paid more than women?

Previous Post: How can Big Companies Offer Good Work-Life Balance to Their Employees?
Next Post: You Want to Start a Business, but in What Industry? Part 1

2 thoughts on “Women: Want Equal Pay? Be a Man”