For quite some time now, waiter robots have been considered as a possible solution to restaurant automation. The world over, robotics technology is replacing manual work at a fast pace. Customers in cafés, restaurants and hotels face a lot of problems due to congestion at peak hours, manual order processing and unavailability of waiters. According to POSQuote, these shortcomings can be handled by using a restaurant automation system where robotics is utilized to order food and beverages. 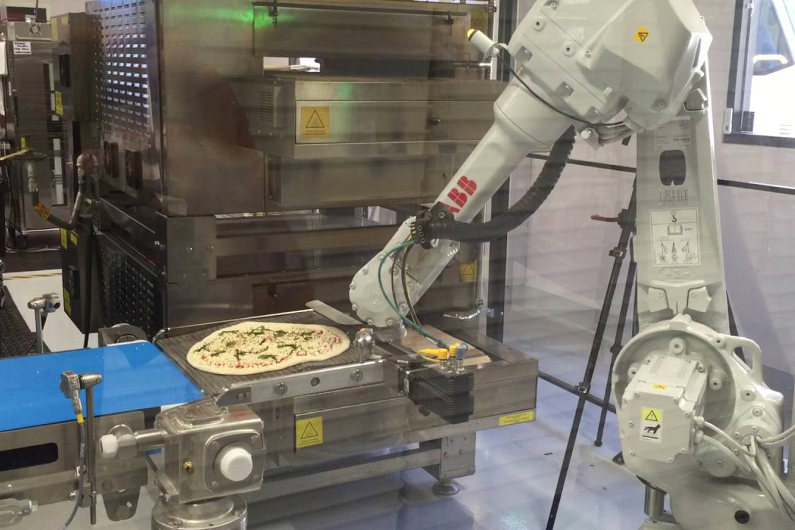 How Would It Work?

The customer orders via wireless network. The kitchen gets the order via menu bar, which is based on the keypad, LCD, and the Bluetooth module. The order is placed using electronic menu bar. This order is sent to the kitchen and received using communication network. The waiter robot then takes the food from the kitchen and brings it to the customer.

Robots are starting to play an important role in the hospitality industry, and the public is excited by the possibilities. Between dropping costs of robotics equipment, the increasing minimum wage, and problems restaurants face in finding cooks and other employees in many cities in the country, eateries can expect to see more food service robots among their staff in the coming years.

No one can dispute that interacting with a welcoming, friendly server is a key part of the sit-down restaurant experience. However, many restaurateurs don’t feel a robot will give human warmth or the ability to handle varied preferences, requests, and accents.

What Will Robots Be Able To Do?

Robots might not be able to handle high-skilled jobs in kitchens, like making or designing new recipes, at least in the near future. This will remain a task of humans, who will now have more time for it. Repetitive, low-skilled tasks are suitable for robots. In fast food restaurants, robots can be placed next to soda machines for some low-skilled, repetitive tasks.

Robots could improve sales in the restaurant business. Why do we think so? Over a quarter of restaurant sales currently goes to wages, insurance, taxes, and worker overtime. This will probably increase quite significantly once the minimum wage increases by 50% (from $10 to $15). Robots promise to bring the total labor cost down a great deal.

A high amount of cost savings will be passed on the customer in the highly competitive food industry. It is obvious that lower prices increase sales – this happened after robots were introduced in various manufacturing sectors.

If you’re human, it can be hard to predict how many calories will come out. This is a problem for diners who are on a diet. A robot with weight sensors can offer precise portion control and you will know many calories would be present. Customers can modify the amount of dressing on a tablet placed on your table or by telling the waiter. Robots also offer mass customization, which would increase sales as well.

When sales increase, restaurant workers get more jobs and pay. Waiters get more tips. Chefs and other high-skilled kitchen staff get more money too.

Robots in Restaurants: A Reality?

One of the first venues to introduce a robot in the kitchen was California-based Miso Robotics. The robot can identify patties on a grill, flip them, and place them on buns. The robot (called Flippy) has become so popular that he is now overwhelmed with orders.

Robots Can Make Cocktails Too!

The robotic bar system Makr Shakr enables users to create limitless cocktail recipes that are served by robots. Alessandra Savio, the startup’s marketing and communications manager, says, “By a process of co-creation, people are able to combine their decisions regarding cocktails with the power of modern technology. I think that we should all be happy that, today, many tasks can be successfully carried out by robots, allowing people to focus on more creative tasks.”

The robot has served more than 1 million perfectly crafted drinks in the past 5 years, with peaks of 800 cocktails produced per night.

Another innovative company, also in California, is Zume Pizza. It has “hired” Doughbot to press dough, which the robot does faster than most humans with decades of experience. Doughbot has several robot coworkers to help him. According to the CEO of Zume, the robots are delicate, yet strong, and extremely flexible. This combination of traits makes it possible for them to handle hundreds of pizzas per day. And that’s not all – the robots are really fast and react to each individual order instead of performing the same motion over and over again. This is something that’s never been done in a restaurant before.

The pizza-making process commences with fresh ingredient preparation, as the team of Zume chops and prepares everything from pineapple chunks to basil for the sauce every morning. Once preparation is complete, the kitchen crew uses Doughbot, the first robot on the line, to press each naturally leavened dough ball into perfectly round pie shells. Then the six-axis robot Bruno puts each crust in the oven to partially bake.

In the afternoon, these crusts are placed back on the line, where other robots dispense a carefully measured amount of sauce onto each pie. After that, the sauce is spun around the pie shell. Then, human staff members top the pie with fresh ingredients, and the pizza is cooled in the fridge before going out for delivery.

Prompted by a desire to simplify food preparation, experts created the prototype for a “salad robot” two years ago. The automated salad delivery system drops tidy portions of refrigerated ingredients into a bowl with nothing more than a touch of a few buttons on a screen.

The mastermind behind the salad robot, Dr. Sekar, was motivated by the mundane task of food preparation. He 3-D-printed the first prototype of the robot to do away with these repetitive tasks, allowing human staff to be more productive.

Thank you for reading about how robotics can be used to automate restaurant duties. What are your thoughts on this? Please share in the comments section!

Previous Post: Social vs. Influential: The Pros and Cons of Modern Digital Marketing
Next Post: Jobs to Consider after Retirement